We are happy to announce the huge release of probe-rs 0.11.0 today. It has been a long time coming and is possibly our biggest release so far with over 7 months of development since the last one in November 2020!

This release sports a lot of internal improvements, bugfixes and quality of life additions.

Most notable for probe-rs are:

On top of that we added support for a multitude of targets! Many SAMD, STM32, nRF5x and LPC devices were added or got improvements.

For a full list, checkout the changelog on the release page.

For cargo-flash we improved the error reporting a lot. Before we would display the plain error probe-rs gave us which was not very actionable for the user. Now we try to give the user an actionable hint like in the picture below.

We have a whole error/hint catalogue and try to expand this. This feature can easily be ported to other tools such as cargo-embed and probe-run too to ease the development.

Ongoing Work & Behind the Scenes

For a long time our VSCode plugin has been the little loved child on the sidelines. Recently, @noppej has put in serious work to make it properly useable! Unfortunately the additions barely didn't make it into this release, but will most likely be in one of the next ones around the corner.

You can check out the current state in the repo to take a sneak peek. While running, halting, breaking and stepping works already, stepping only steps single instructions at the moment, which can be tedious. This is being worked on as well as RTT support in the VSCode terminal section! This will be extended in the near future to be a full plugin that also supports RTT down channels as well as an SVD viewer and ITM tracing!

A proof of concept of the SVD viewer can be seen below. 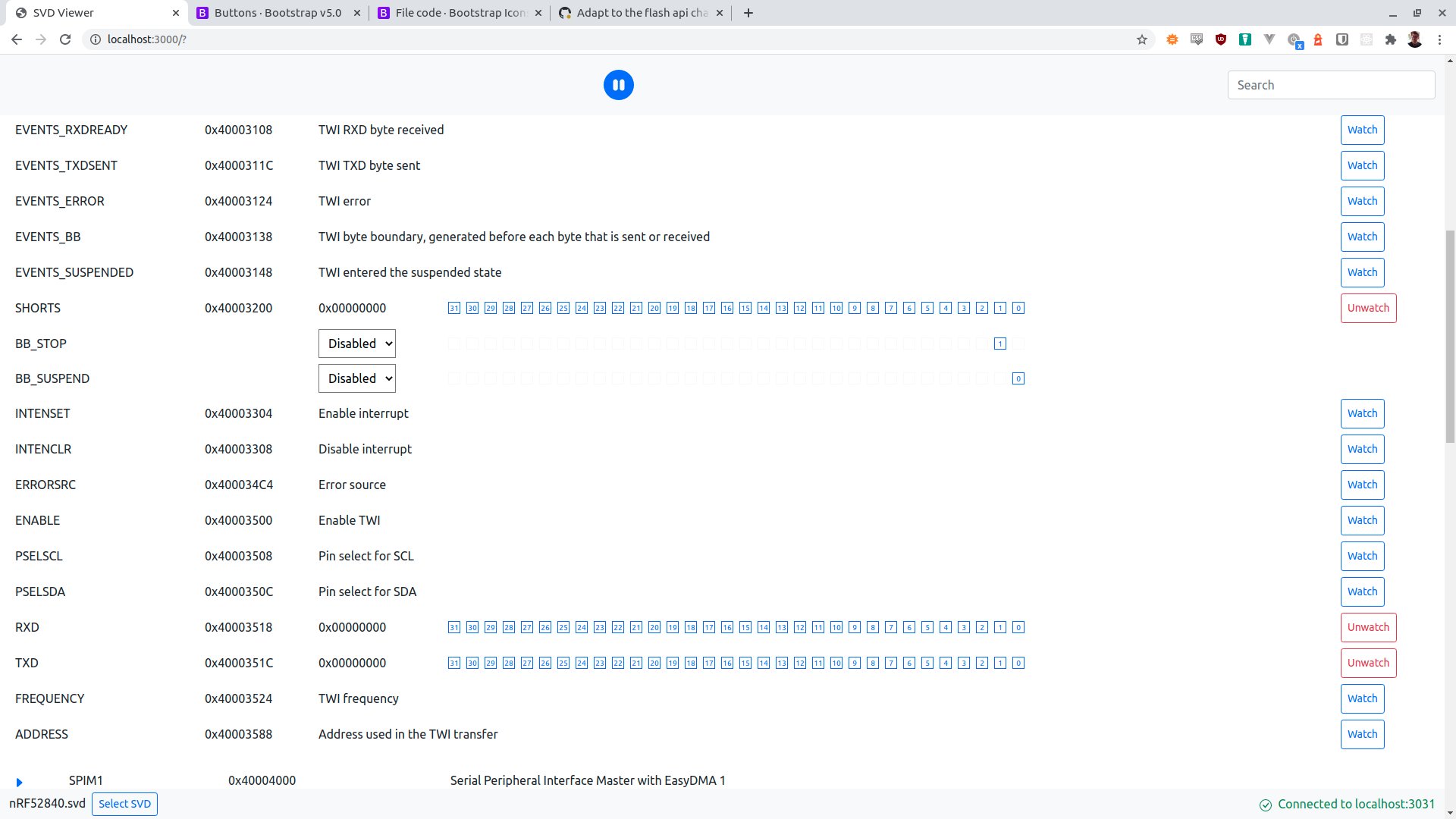 Debug sequences are ARM's intended way of performing special procedures on targets which deviate from standards (within reason or even violating the spec) to unlock features of different targets which go beyond simple flashing.

In short, sequences will enable many new possibilities around different targets that have been difficult until now!

@dirbaio and @diondokter have been hard at work to make the handling of multicore MCUs possible. This is entangled somewhat with debug sequences and will most likely hit together. Unlocking and flashing of a nRF5340 (two M33 cores) already works, but we are missing a few changes to the core library which will have to be made to finalize this addition.

Not part of this PR, but closely related and under development as well is SWD v2 Multidrop support. This will enable us to flash chips like the RaspberryPI Pico. While a useable fork already exists, some work is still left to integrate this properly into the probe-rs core.

We have recently merged a great addition by @Tiwalun to improve testing of our PRs in the form of a smoke testing tool in the main repository. You can set it up to test each PR against the devkits you own. This will catch many regressions and errors before we can merge them into master.

To step this one up, we have worked on a custom hardware rig which will allow us to do large scale automated testing of each PR on a set of N targets multiplexed against M debug probes. A sneak peek of the rig's design can be seen below ;) 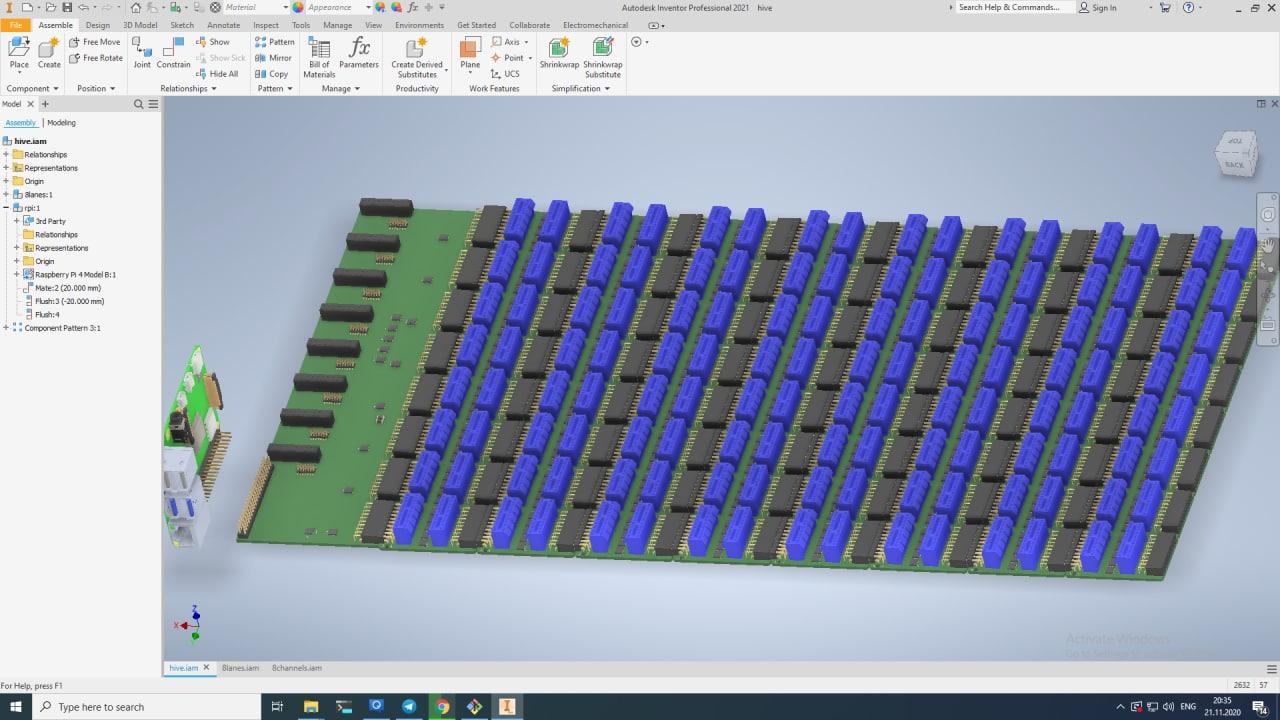 To push this project a little further, we have put up a posting for a BSc thesis with a local technical university (Switzerland). If you are a BSc student and would like to work on this, feel free to reach out to @Yatekii no matter of locality. We cannot promise anything but we will try to figure something out to make this work!

We announced the hs-probe quite a while ago. Many of you have ordered one already. Unfortunately the manufacturing was hit by the global chip shortages as well. The good news is that manufacturing has concluded today and the probes now go into programming. This means we can start the shipping of the probes soon! Emil has been working really hard to make this a possibility and get the probe manufactured even during chip shortages! If you have not ordered a probe yet, and would like to get ahold one, you can do so on our shop.

We now have a pipeline set up to automate releases of the probe-rs core library and related crates. This should allow us to release way more often so your own tools do not have to pull from master constantly. At the start we are aiming for approximately one release every two weeks. This is an experiment and we will see how it goes. We believe that we should bring new functionality and especially fixes to you as soon as possible.

Alongside more releases I'd like to try to blog a little more about the ongoing development and curiosities we encounter. Though, to focus more on development and user support we will keep this promise as small as possible for now ;)

We put a lot of work into probe-rs, because we believe in it being an important cornerstone to the embedded development ecosystem. All of this is voluntary work and we continue to work on it voluntarily, but during times when life at our day-job is a little more stressful it can become hard to spend the evening putting in extra work hours, which is why we set up a sponsorship option.

At this point, thanks a lot to all of our sponsors that already contribute a great deal to probe-rs' continued development and support!

If you love probe-rs and want to see it grow and prosper, we would love if you considered [sponsoring] probe-rs development. Some of us would love to at least work part time on the project to speed up its development and improve the quality of our tooling. Additionally, as explained above, we have big plans for hardware based testing to ensure the highest possible quality software, which will impose some monetary cost of course. You can do so through Github or OpenCollective.

We have heard of a handful of companies that are using or going to use probe-rs in production to provision their devices. This excites us very much and reassures that we are actually making a change in the embedded ecosystem!

Thanks a lot to all of our users & sponsors that show us that our work is appreciated.